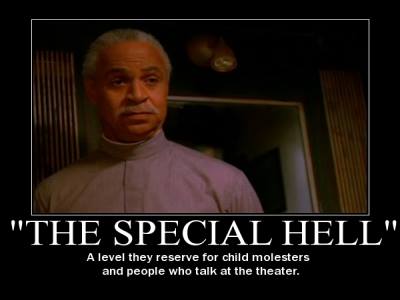 I found another category of “specially damned” individuals rampant in modern times. All those people who morph the faces of their friends or famous people (who can tell) on classic paintings. If that weren’t bad enough, they share them to the point it uselessly pollutes Google image search with the world’s most wretched and ugly Photoshop.

For goodness sake, what did Velasquez ever do to you?!  Just search for Velasquez if you really want your eyes to bleed.

OK, Fine. This is by far the best of the lot. It’s even funny.

So I guess sentence reduced to eating desert first and purgatorial probation.

Because, lolcats.  Make up your own tag line! 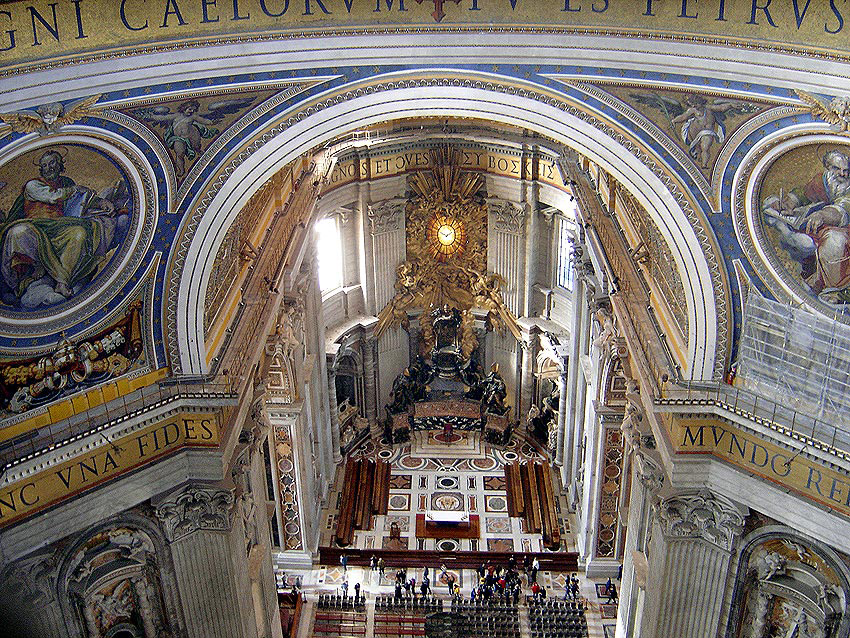 Today is the feast of the Seat of St Peter. “Upon this Rock I build my Church.”  Ahh Bernini.  So glorious!  (Yeah, I needed a break from Lent, too. 😉 )

⇓Yes, this image depicts an on-going mass.  Dude, taking pictures during mass? Really?  But it is a nice picture, and gives you a sense of scale.

But  I can understand why some people go, “but why all the stuff? Wasn’t Jesus a humble carpenter? What are you people on?”

Well, it’s like this. Jesus is your buddy, (which is a pretty radical position for a deity) and I’m not denying that. But he’s also GOD. And God is the omnipotent omnipresent creator of the universe and everything in it. He is Existence Itself. The culmination of All that is Good. He is Love, yes, I can go on and on about this all day… even all eternity. But the point is… think about when this was built.  What was it’s purpose?

⇓⇑Nice closer image of the chair. 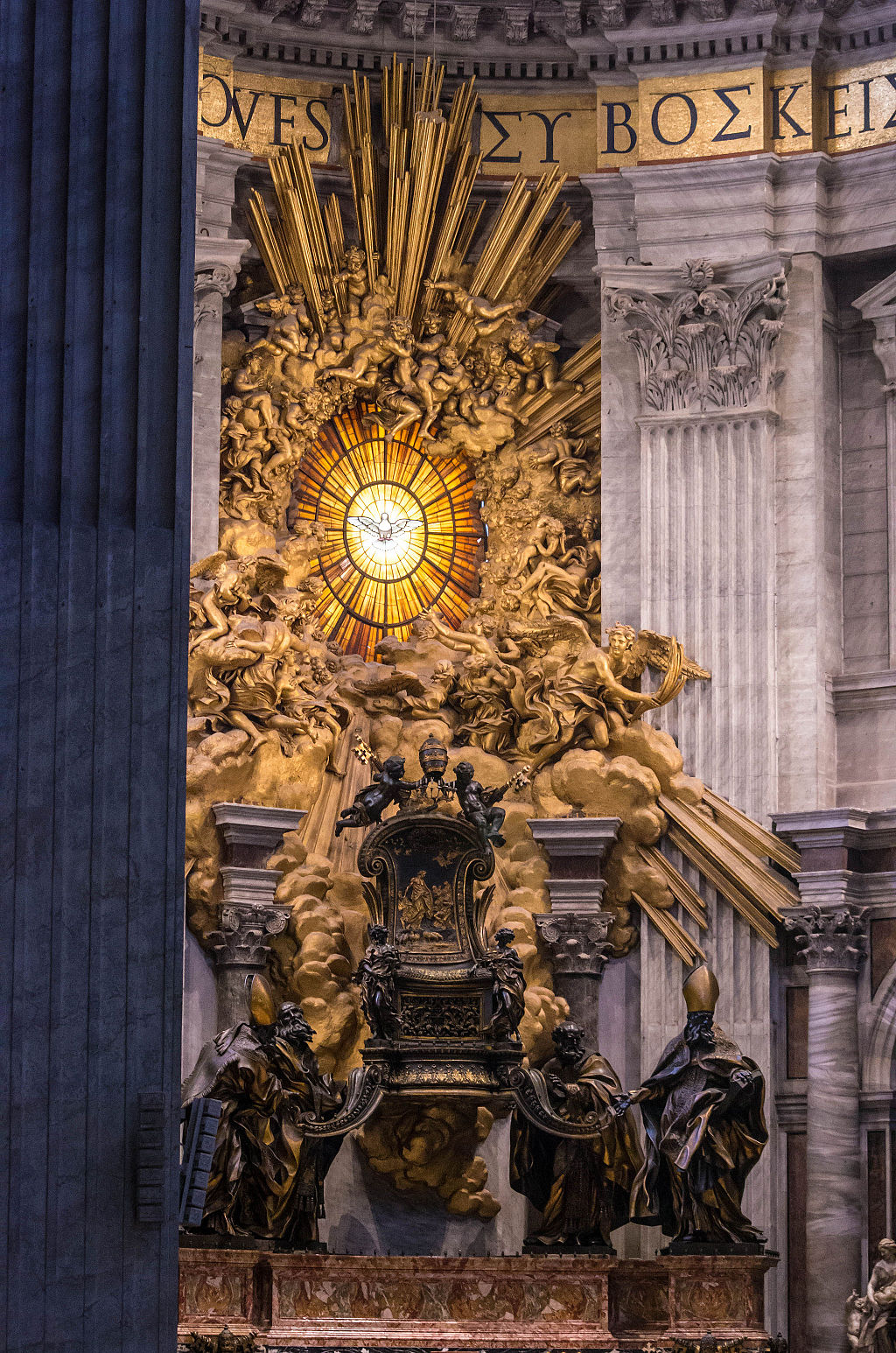 By Antoine Taveneaux (Own work) [CC BY-SA 3.0], via Wikimedia Commons

“To glorify the Pope?” snarks the peanut gallery.  Well, I’m sure the man who commissioned this had an ego problem or two, but it was designed, built and dedicated to the Greater Glory of God.  At least some people here had intent, and it was meant not as a palace for a king, but a palace for God HImself. Meaning it should surpass the beauty of all palaces, the personal wealth of all kings, both in the past, in the present, and in the future.  And that is why Bernini made it as he did. Even if you question the Pope’s motives… will you question that this artist did not want to give his absolute best to God?

⇓Below here, is the altar of sacrifice. That is why the pillars have a vaguely abominable appearance. This is Cavalry.  Cuddly putti aren’t called for in that context. That is why the angels on top of the roof cornice are mourning..

There were holy men working for the church, even back then. And they did not question it. It was built for the Faithful, and for God.  A church was the only establishment where ordinary people would see this kind of thing.

Furthermore, comparing a Pope to a king is ludicrous. The Papacy is the longest standing democratic institution on Earth.   How so? Look at the first picture.   It’s a shot from the Papal enclave that ultimately voted in Pope Francis.   Also, the Pope only teaches what Christ teaches, and cannot make up new teachings. He can reformulate rubrics and how things are done, but it must always conform to what Christ taught, or his teaching is invalid. So he does what Christ says, and is a servant of his Church, mostly to proclaim unity, arbitrate squabbles and represent her in the global theater.

Returning to the topic of elaborate and gilded churches, I have one last point. There is a tradition and teaching that a church is where heaven touches Earth, a place where God dwells amongst his people. (Hint: This is my body.) SO it reflects not only the glories of Heaven, the presence of God’s Glory on Earth, but also the Temple on the Mount. (Hint: He shall return in Glory.) If that isn’t reason to have glorious surroundings, I don’t know what is.

⇓Another attempt at scale and impact, backing off, trying to soak it  all in. 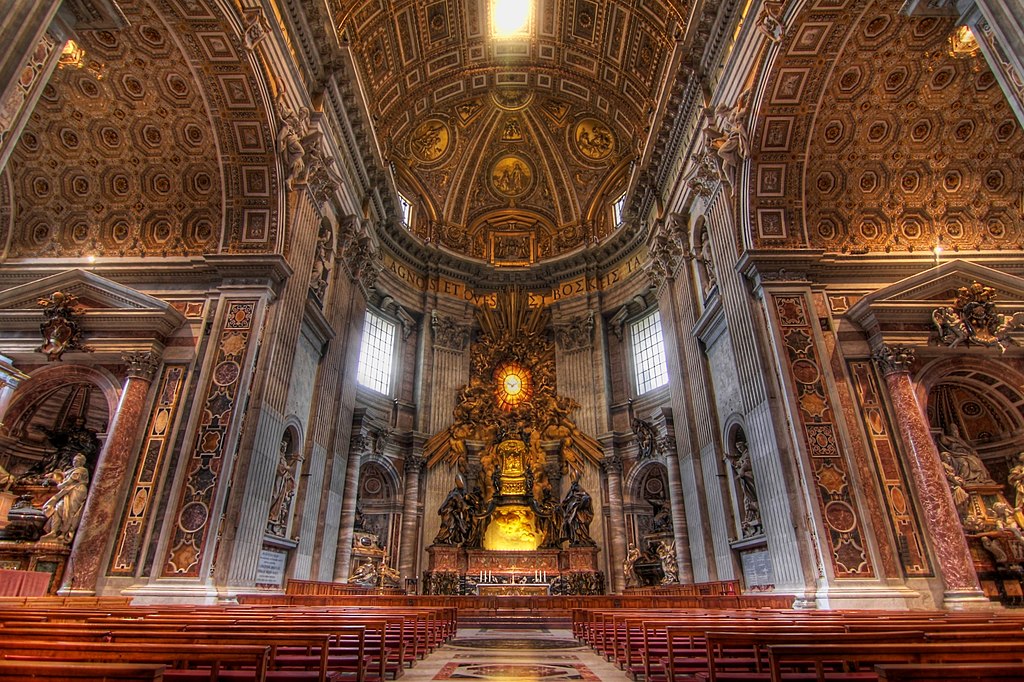 By Michael Day (St Peter’sUploaded by russavia) [CC BY 2.0], via Wikimedia Commons 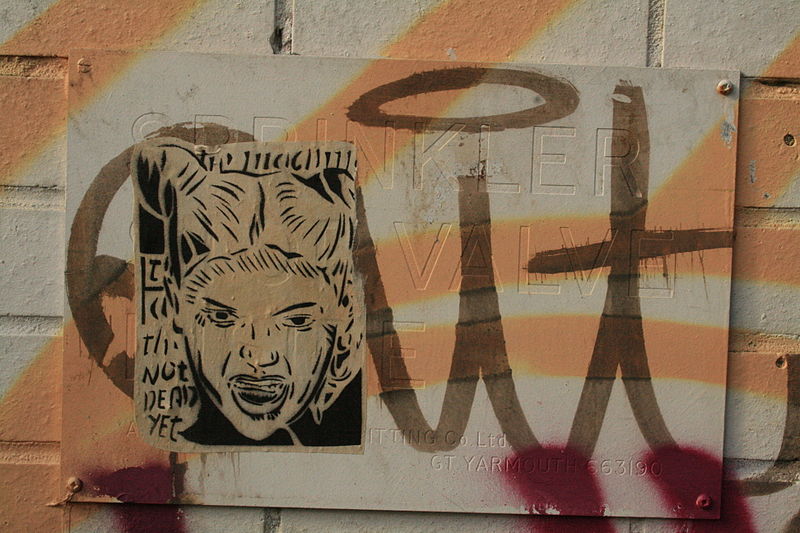 Yep. Hit a wall. But I’m digging my way out.  It’s hard to explain.  Not exactly blog hate, more like… what the hell am I doing, part MCXVII.

I can’t tell if those are pigtails or horns.  It works for me either way. I’m also perversely fond of woodcuts done well, and this fits that bill even if it’s technically a stencil.

Also, distracted with travel right now.  I will explain later, I promise.

Bereft of inspiration, I went to my favorite source of free art and hit the random button.

This time, I struck gold.  Take a look. 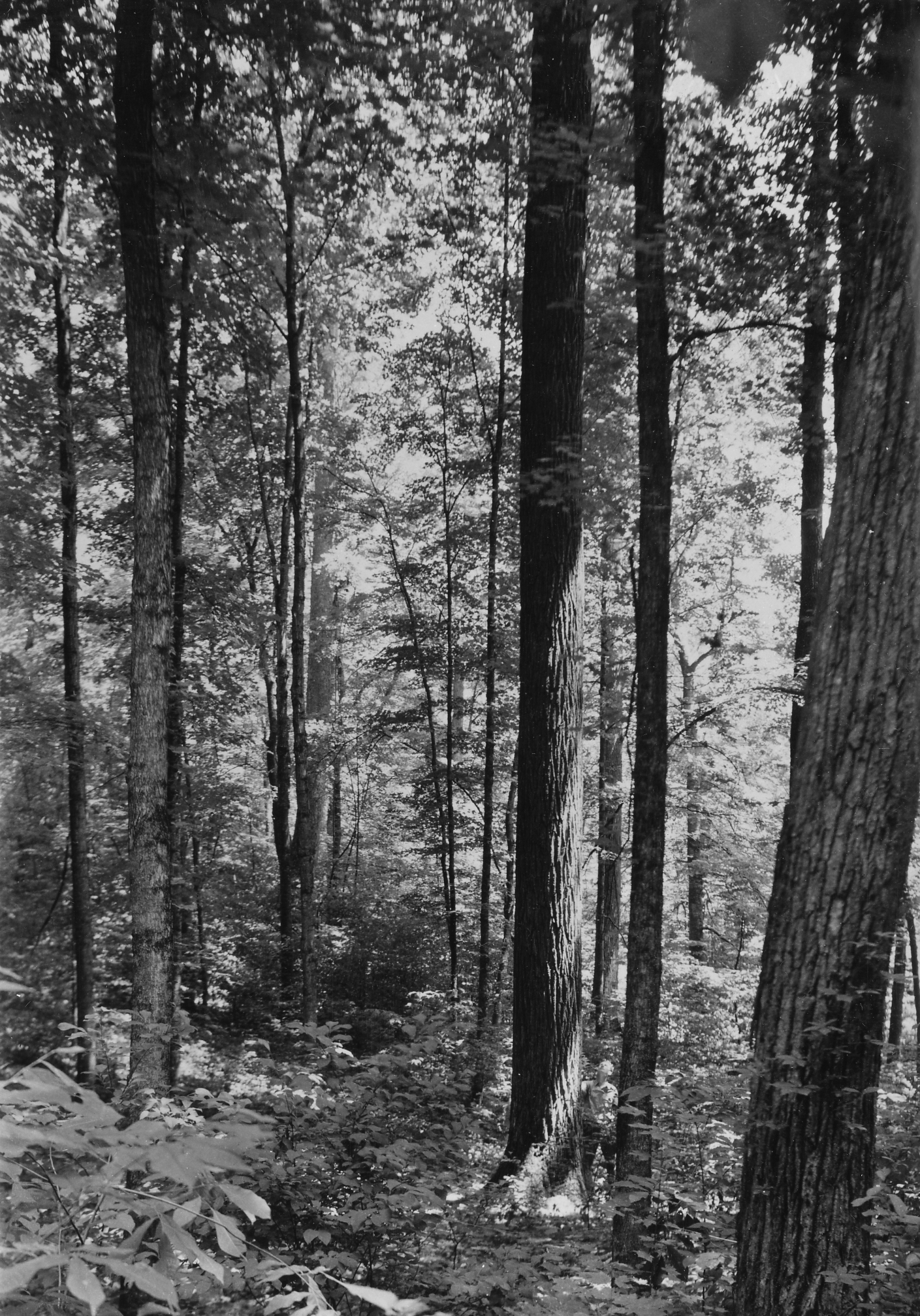 By Unknown or not provided (U.S. National Archives and Records Administration) [Public domain], via Wikimedia Commons

Is it just me, or does this look like Ansel Adams? Maybe the work of a skilled admirer?  This was taken in June of 1941.

Reminds me of Fiat Lux: Redwoods in Founder’s Grove on a smaller scale. 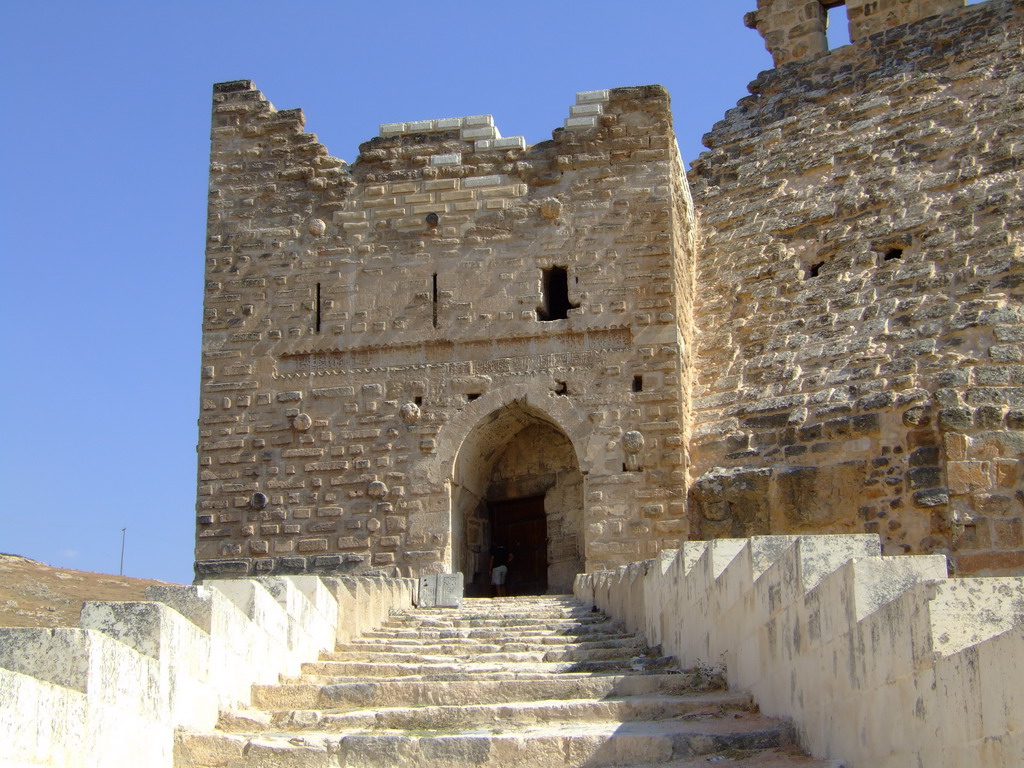 “Qa’alat Shaizar Syria was a medieval town and fortress in Syria, ruled by the Banu Munqidh dynasty, which played an important part in the Christian and Muslim politics of the crusades.”

The tomb of St Remaud. His feast day was once Feb 2. 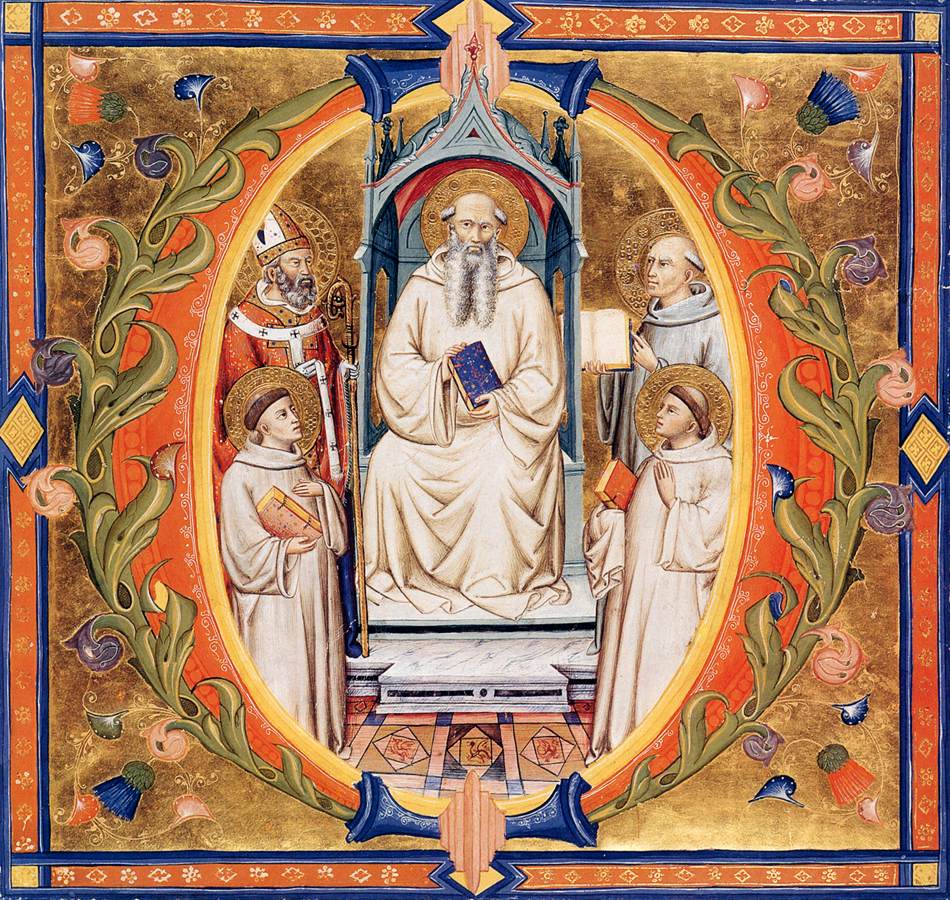 In Honor of Our Lady, I found a Lourdes Grotto in Argentina– plus two other roadside shrines in the same country. A call it a threefer of Marian Devotion.

By Beatrice Murch from Buenos Aires, Argentina (Prayer) [CC BY 2.0], via Wikimedia Commons 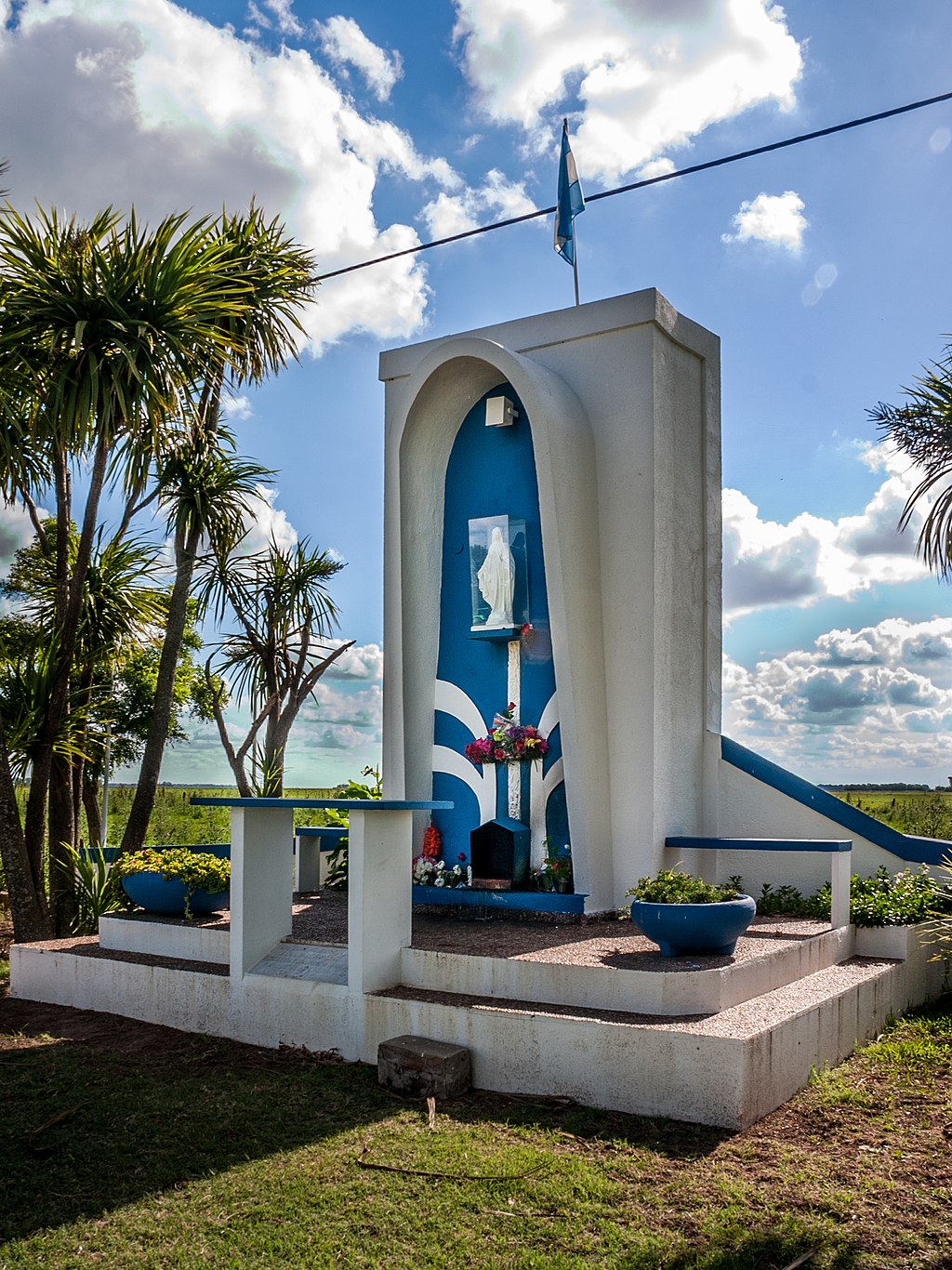 Chapel of Our Lady of the Miraculous Medal, Argentina 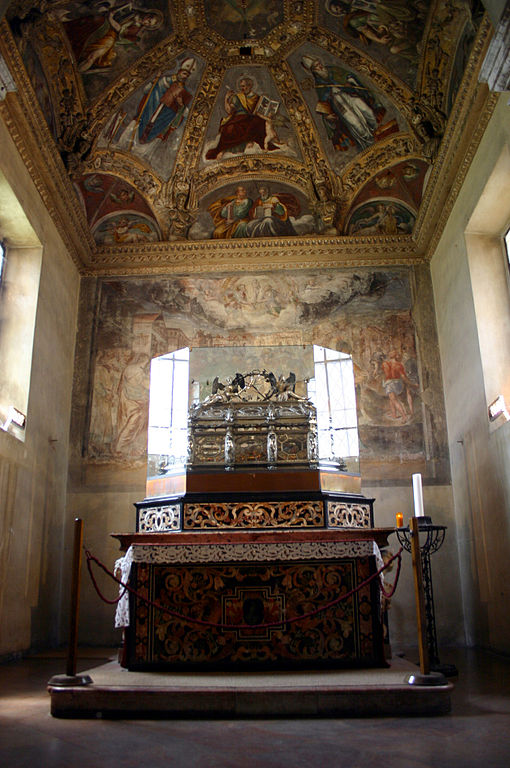 Carlo Garavaglia, Reliquary ark of Saint Aquilinus of Cologne, on the main altar in the Cappella di sant’Aquilino in the Basilica di San Lorenzo Maggiore in Milan, Italy. Picture by Giovanni Dall’Orto, May 18 2007.

Here are some close-ups on the paintings.

By G.dallorto (Self-published work by G.dallorto) [Attribution], via Wikimedia Commons

By G.dallorto (Self-published work by G.dallorto) [Attribution], via Wikimedia Commons

By Carlo Dell’Orto (Own work) [CC-BY-SA-3.0], via Wikimedia Commons 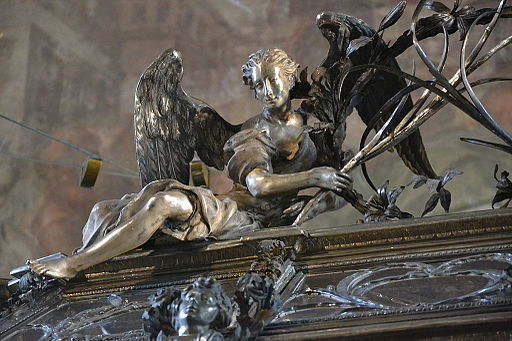 By Carlo Dell’Orto (Own work) [CC-BY-SA-3.0], via Wikimedia Commons

Image extracted from page 309 of King’s Hand-book of the United States planned and edited by M. King. Text by M. F. Sweetser, by SWEETSER, Moses Forster. Original held and digitised by the British Library.

As I just discovered my baby kitty (AKA Leif the furry monster) has cancer, I’m putting up a Sunday Shrine to St. Roch in New Orleans. 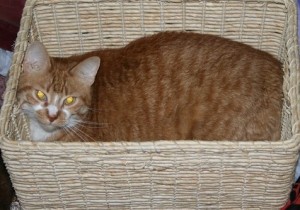 Here’s hoping that the fine folks at NCIS NOLA mention this awesome place! Though looking at the photos, they’ve had some shots of this area already. 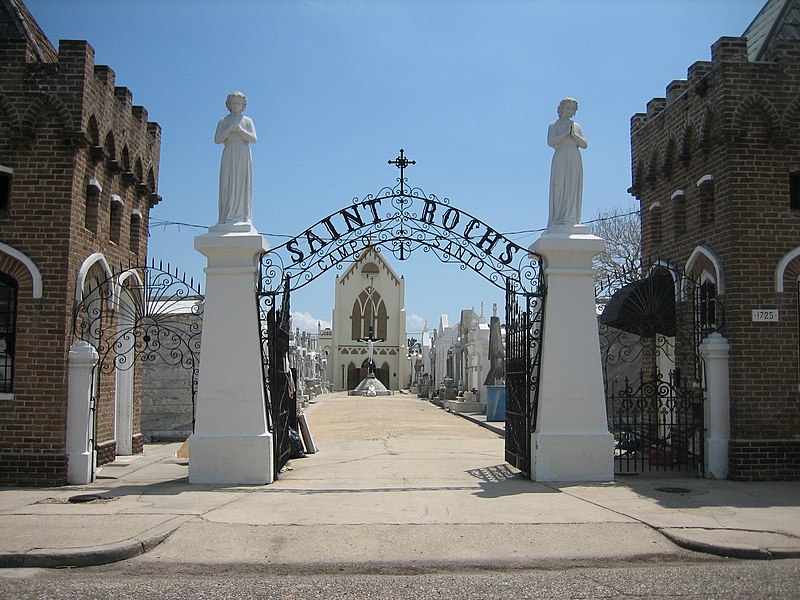 This was built in honor of St. Roch, who is a plague saint very popular in Germany.  You can find lots of chapels and shrines to him all down the Rhine.  St. Roch used to be a predominantly German neighborhood, and this chapel retains the culture that built it.

During the yellow fever epidemic in 1868, Father Peter Leonhard Thevis prayed to St. Roch to spare his congregation.  If no one died of the fever, he would build a chapel in the cemetery in his honor.  Lo, no one died, so this chapel was erected. It has been a place of prayer and healing.

So, why do I ask St. Roch to help my cat?  Because St. Roch himself became ill, after healing so many. When the fathers of the city tossed him out, a nobleman’s dog brought him food, licked his wounds.  St. Roch survived to heal, and has been considered a protector of animals. 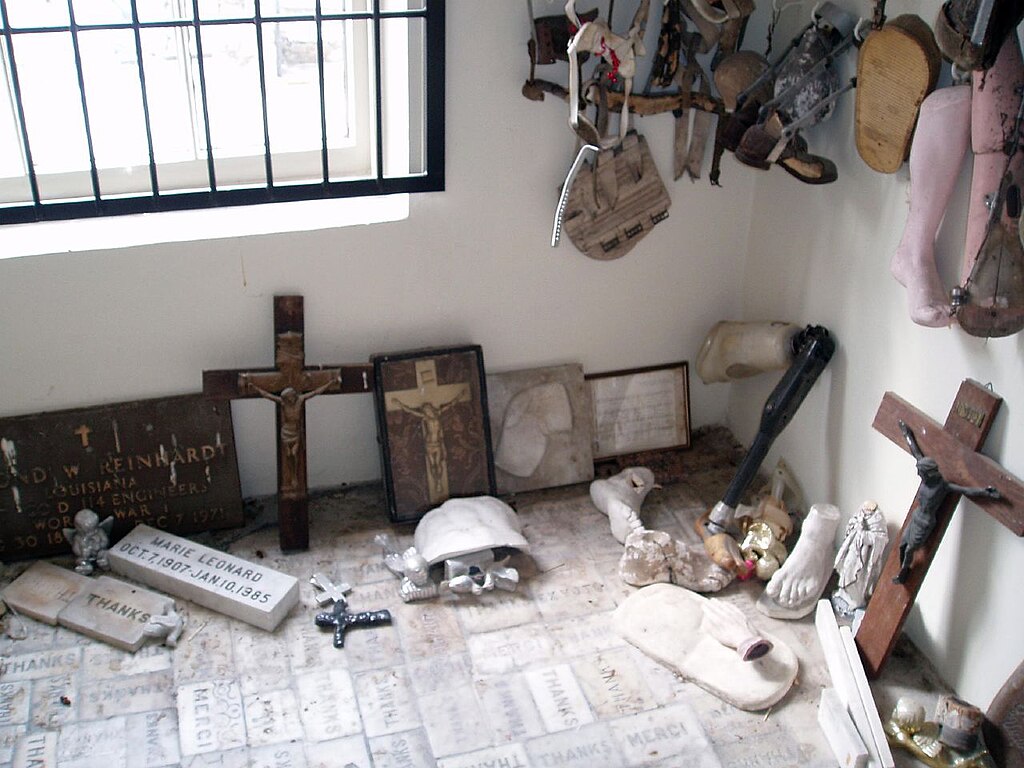 A great many people have come here for prayers, and leave tokens of appreciation, including moulded body parts, bricks of thanks, pennies and even food.  It echoes the milagro tradition practiced in the Southwest, especially on the border. It has a long history.

Note: Histories came from this wonderful article from Tulane University, and Wikimedia Commons.

UPDATE: Another nice set of photos of St. Roch cemetery.